Locked down in the dimly lit basement of a run-down bar in a dodgy area of an Eastern European capital, I started to seriously wonder if coming down here really was a good idea.

The place looked like a Soviet bunker, probably last vented during the Cold War judging by the smell. It was packed with stuffy, dark office furniture and books printed in Cyrillic on the shelves, as well as a faint journal illustration on the wall of a Soyuz rocket being launched. The Cold War bunker vibe was further entrenched by a bust of Lenin and a handgun on the officer’s desk. It all felt like walking into the opening scene of an 80’s spy thriller, except this was real life and last time I checked, I was not bulletproof like James Bond.

So what brought me and my friends to this place? Well, it was supposed to be a game. Or so were we were led to believe. We booked the room on the internet and came here to have fun. Now we were locked down in what appeared to be the local KGB headquarters and our hearts sunk for a moment.

But then we did not have much time to contemplate the meaning of life. We were told to get our butts out in less than sixty minutes. In order to do so successfully, we had to solve puzzles. Lots of them.

So we started to explore the place. We soon found that the room was full of secrets. We found weird messages and mysterious codes left, right and center. It all had to come together somehow, but at first we had little idea how.

But then it started to make sense. Clues helped us connect the dots. Soon enough, we’d opened the first padlock. Our first success.

We’d started to get the hang of it. We had to sift through the entire place. Every little detail could’ve been relevant. We had lots of failed attempts, but we figured out most of the puzzles and were making steady progress. So much so that we felt at some point we’d manage to get out well ahead of time!

But the door we opened only led to a new room. We were cast back in the moment we seemed to be close to the end. All of a sudden, there was pressure again.

We continued on, but finally got really stuck with the last puzzle. It felt so close, but we did not have the solution. The clock was ticking.

There were forty seconds left when one of us realized the solution was there in front of us. This final twist added to our sense of triumph: we got out literally seconds short of one hour.

Could you imagine being one of the first groups to go through the first escape room?!?!?

That all happened back in 2011. There are more than 2,000 game venues across the globe now. But it was that basement in Budapest, Hungary, where a new entertainment industry was born.

It was there where it all began. 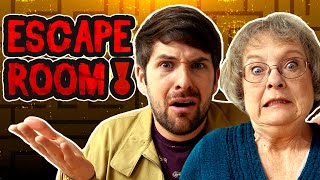